Falling clouds at Chanel by Suvi-Elina 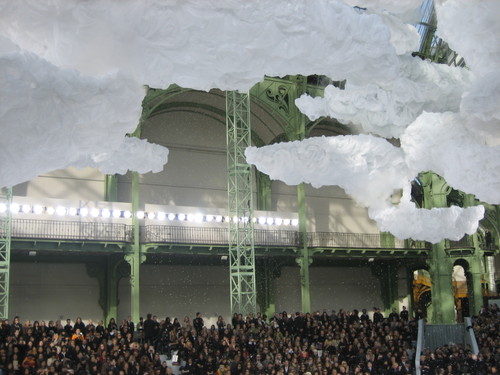 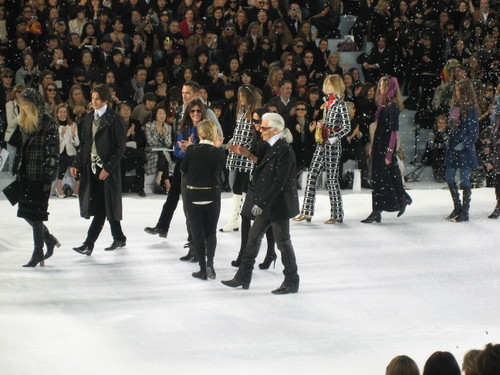 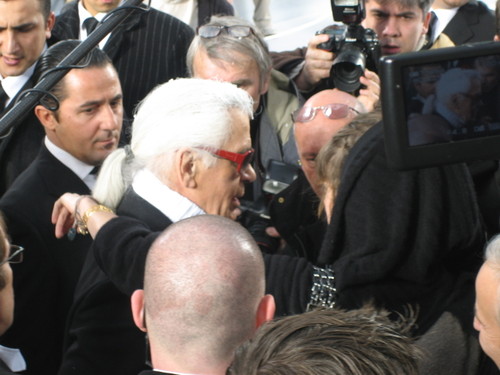 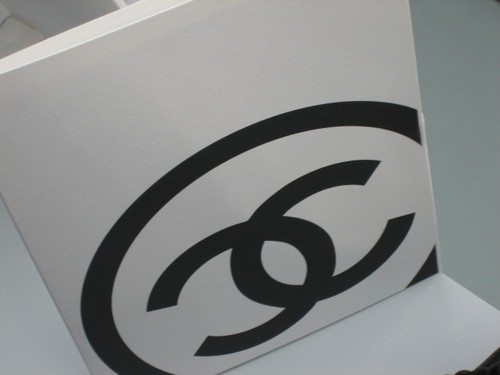 At Chanel it was a cold and frosty winter morning. Spring is about to start and we stepped back to chilly winter...I had this feeling I was back home in Finland :) The stage was an ice skating rink,  roof filled with white clouds and falling little snowflakes.  What a pretty little thing!

The models were not so happy though about the slippery and bumpy catwalk... as if it wasn't difficult enough to make a decent catwalk with the 10cm high heels in super slim skirts...

For the very first time this week that show was on time  and people were still arriving and looking for their seats when  it suddenly started. Some people must have missed the beginning because of that, but 'the early bird cathes the maggot!'

Chanel winter collection is about tweed in boots, pants and jackets... black little dresses and evening wear with chiffon, layers and sequins. There were some interesting color combinations that is not regular for the house: black-turquoise and black-red tweed boots with  the matching jackets and skirts. Collection was very harmonious, in balance.. but definetly not borning! Everytime I am thrilled to see what Karl Lagerfeld has figured out next. I admire his capacity to constantly evolve, and move on, at the same time respecting the image of Coco Chanel and her lifetime work.

As I got there late, I only have two pictures to show at the moment 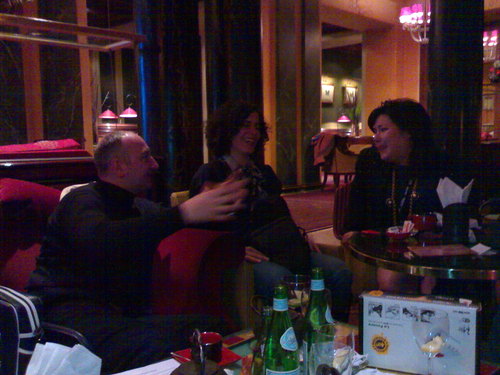 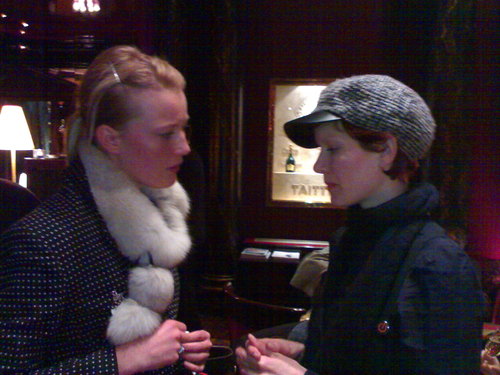 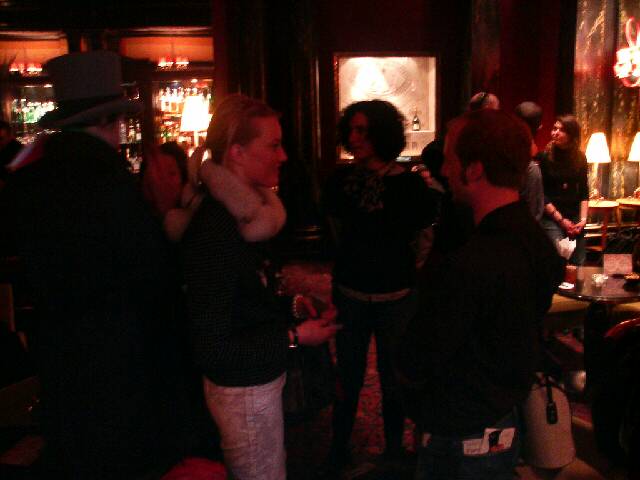 Lots of people showed up to learn about geo-location. Unfortunately lot's more showed up, but the hotel louvre turned them away. My apologies for the inconvenience. If anyone would like to talk with me about geo-location then please email me i will be happy to meet you.

Ungaro show was a show off.. electronic disco girl with furs and sequins,.. But... no matter how loud the music is or the clothes are shining, there seems to be a common problem among the audience in most of the shows I've been to this year; people are bored... and I felt this already in Milan.  I think it's a bad sign when the front row is browsing their mobile phones or chatting to the neighbour during the show...  and run out of the room on the minute the show is over... this kind of behaviour shows no real interest on the clothes. On the other hand,  I feel there hasn't been so many collections these days that really inspire people. I think we're just crossing here a kind of interval... that all this leads into a new era, which is about to be born, but noone just quite knows what it is, time will tell.... 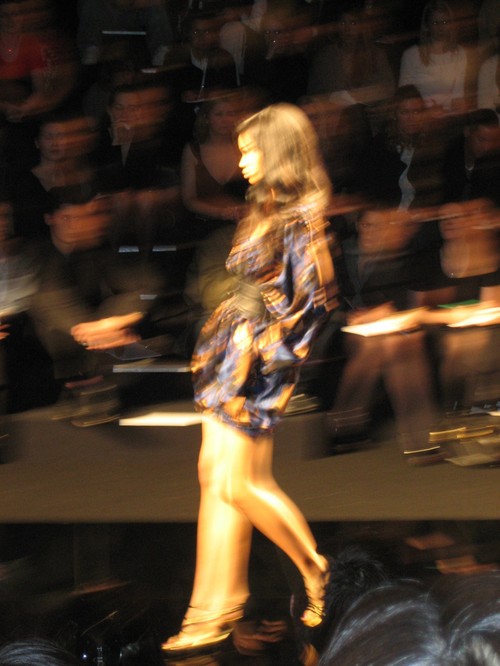 Propably the most famous and fashionable store in Paris, Colette is celebrating its 10th anniversary year in March.  Their recent masterstroke was to bring the popular Proenza Schouler collection for Target (the megastore in US) to Paris. While waiting in the lane to enter the show of Emanuel Ungaro a group of white dogs came out of a van with their eyes market in Target logo, like a ...well.. "Target" ...how smart

After the show, we were temptated to go to Colette to see the collection, how it would look like. And apparently we were not the only ones having this idea. The area was closed, due to over-popularity... what ever that means... so we didnt get to see it... ah well... never mind... as if there wasnt enough clothes to see these days anyway :) 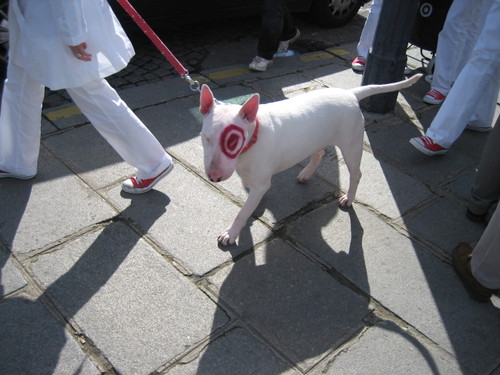 Today singer Lily Allen was wondering around  the backstage of Cacharel. She was very easy-going, with no brainer attitude ... oh yeah, I'd like to meet more people like her around here! It's actually extra ordinary to see a celebrity in a show not head-to-toe dressed up in designer clothes, as it usually is the case... She could have been anyone, couldn't tell the difference. Maybe I wouldn't have recognised her, if  there wasn't any tv-cameras around her... 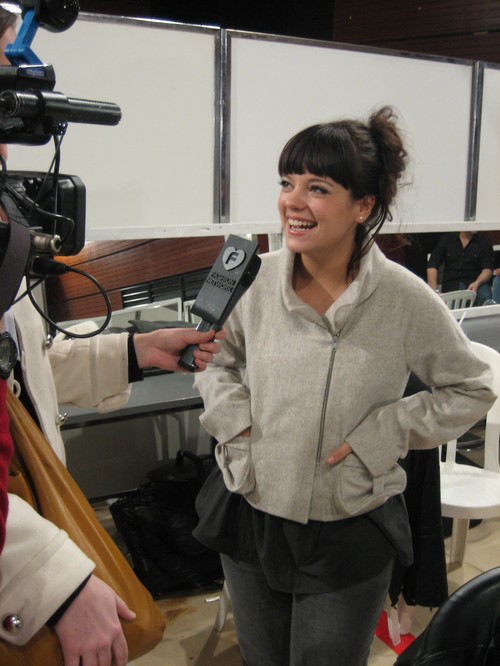 Today I started my day with Leonard. The backstage was amazingly pieceful and quiet when you're use to the non-stop hussle and bussle  24/7 during this week. My surreal feeling got a wake up call when the last and most famous models walked in... on that moment the hair and make up artists started to get nervous as  they had about 15 minutes to prepare those girls... you see, the more famous model you are, the later you are allowed to show up at work... and often the shows start according to the  top models schedules.

Veronique Leroy's  collection for Leonard was focused on structure and line and it put down on a muted autumn palette in gentle shades of ochre, heather, chestnut, midnight blues, ivory and deep reds. The shocking pink in the prints gave the contrast.

Here some pics of the backstage 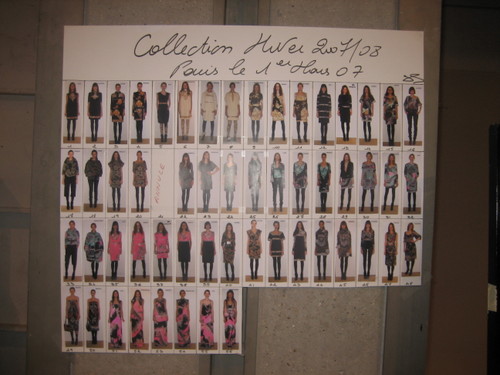 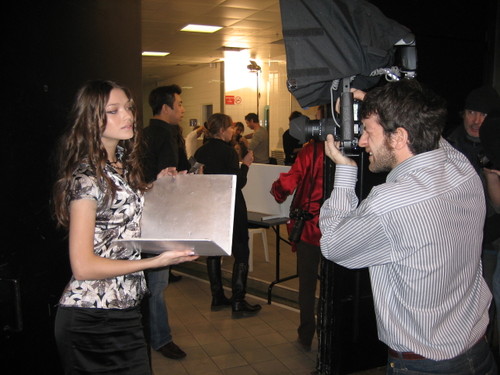 One of my favourite things to do during the Fashion Week is to watch how the Masters of the Fashion journalism do their job. Here for instance Suzy Menkes among other journalist taking notes about the show.  I believe that's a good way  to learn... from the top of the top journalists, who have  access all areas... they've been there, done that... 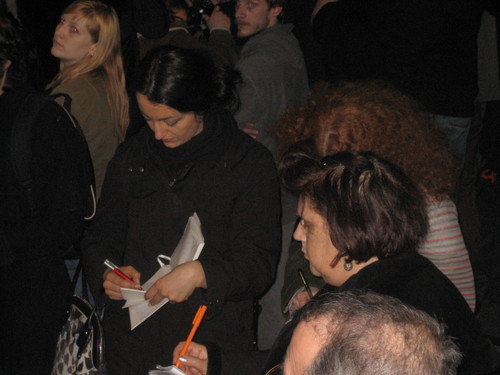 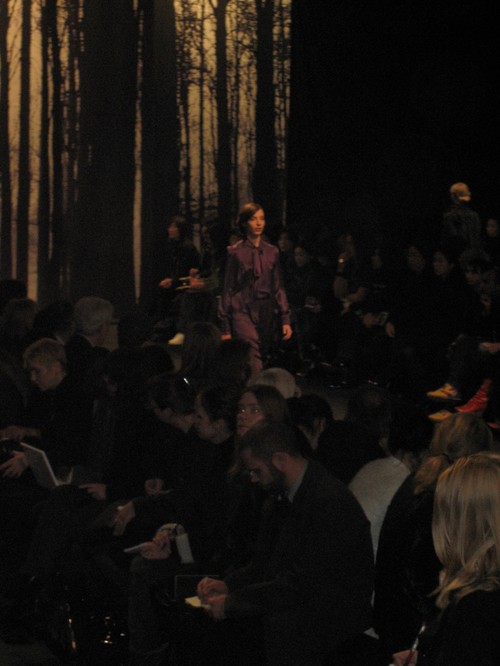 Last night this young Belgium designer showed a strong autumn/winter collection where I have to mention my favourite, the long wide leg trousers, which the designer called "the new silhoutte after the skinny pants era".

Its is just too bad that the Paris Fashion Week has become overcrouded of designers (over 100 shows held during the week) which leads inevitably to the fact that some of them wont get the attention of the media that they would deserve. That was the case with Veronique last night.  Her show was squeezed between the major designers shows, plus the fact that her location was far away from the center of Paris, in the north, which will make some people to skip the show, not to miss the following one (Givenchy). I was shocked to see how many people didnt wait until the end of the show, and left on the second the last outfit was on the catwalk... but then again, the show was running over an hour late... so you could see the frustration on the peoples face, when they try to cover all the shows, and in the end they just get very tired and wont have the energy and enthusiasm to focus for the most important thing: the clothes and the designer behind all that.

Dispite of all this, Veronique Branquinho gave us plenty of beautiful items to wear this fall. Color palette was dark (black, brown, violet, beige, grey)... dark as a forest on a rainy autumn evening with her beautiful feminine old-times twist.