Original chinese lifestyle and designer studio La Vie can be found from the address: countyard 7, lane 210 Taikang Lu road, Shanghai. The street is full of small art galleries and little interesting boutiques. Just dont get confused by the area as the other streets would not make you think about a design block. Everything worth checking out is in this street. 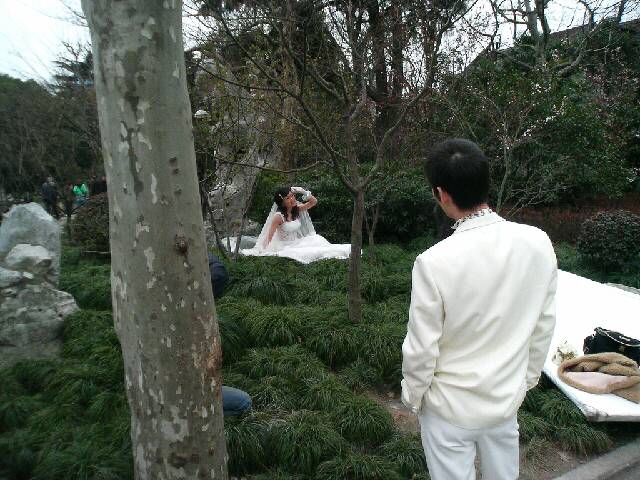 Chinese tradition is that a couple getting married takes their wedding pictures before the actual wedding ceremony. I was walking in a park in Shanghai when I saw this young couple in with their photography team having their wedding pictures done. the bride was so nervous in front of the camera, and her future husband was supporting her. I had a blast watching this together with the other passers by. 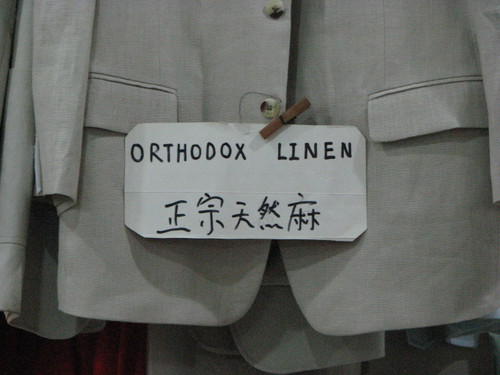 If you are good at sewing, Shanghai's various fabric markets are your heaven on earth. The choises are never-ending and the prices are notably low, if you know how to bargain. But if the self-sewing is not your thing, you can go for the tailored clothes. The picture is taken from one of the fabric markets in Shanghai. I paid attention to this name of the fabric... hmmm.. can somebody tell me what is Orthodox linen? Or is it just one of those hilarious Chinese-English translations?

Some more tea? by Suvi-Elina 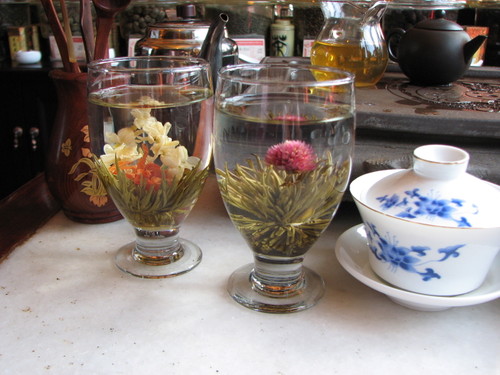 Having a cup of tea in China is really like a piece of art...

Today I was strolling around  the old town when all of a sudden this Chinese guy grabbed my arm and pushed me in the middle of huge group of people. In a second he removed my hair-band, and started zealously brushing my hair and speaking with a  loud voice to the people around, who were  staring at me with their eyes and mouths  open. As I don't speak a word of Chinese, I didnt understand what the hell was going on... until the guy  finished brushing my hair and presented this strange hair device to the people arond him. He seemed so excited when  making his hairdo presentation to the audience, me as his model... after some confusing moments he let me go with this  new hairstyle. Apparently my new look is in fashion at the moment as I heard people's admiring sighs and when he set me free, many people wanted to buy this magic hairdo from him.  I felt like Kate Moss selling millions of what ever she is touching or wearing... maybe this time it was just my blonde hair that sticks out of the crowd in Shanghai, where 99,5% of the people you see in the streets eventually have black hair. 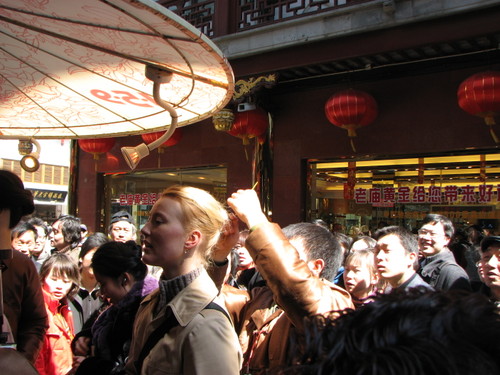 In search of some original Chinese  clothing handwork, by accident I found a shop from a quiet left behind street near a busy Taikang road in Shanghai. The old Chinese women work inside the shop to produce the best quality clothing and home linen for their customers. Clothes are inspired from north of China.  The clothes also reminded me of Kenzo. They must have been in search for the inspiration around the same regions here. A bit difficult to find here, but worth it. SHANGHAI HARVEST STUDIO, suite 118, no.3 building, 210 Taikang road, Shanghai. Tel +86 21 6473 4566.

Tailor made clothes by Suvi-Elina 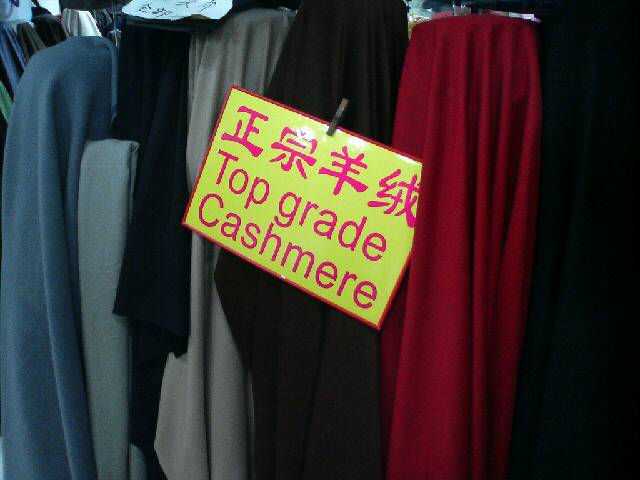 If u are visiting Shanghai you should definetly profit from the tailor made clothes. Ther are excellent tailor shops to make your wildest couture dream come true for reasonably cheap price. Service is professional and friendly and even if they don't speak English, they try their best to serve you. I just ordered a white long shirt dress in coton for summer that i could not find from the normal shops and I was so pleased for the result.  Here an advice for a good tailor shop in Shanghai (but there are of course so many others as well): Eric Chang, rm. 310, 3FNo. 399 LuJiaBang Road. 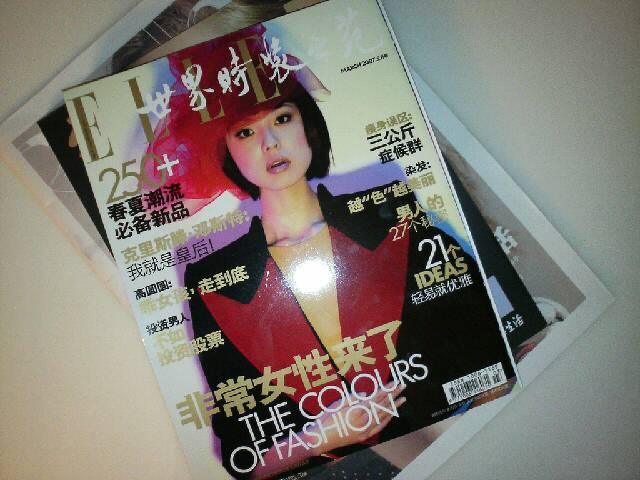 China also has all the leading fashion magazines such as Elle, Harpers Bazaar, Marie Claire and latest arrival is Vogue who launched their Chinese edition in September 2005. It was a big step forward in Chinese fashion industry.   China has again become a phenomenon in Europe and US.  Right now Paris is talking about a Chinese hit designer Ma-Ke who has an exposition until 6th April in Joice Gallery, 168 galerie Valois, 75001 Paris. Go check it out if you are anywhere around. www.mixmind.com

A good place to search for old Chinese stuff is in DONGTAI ROAD in Shanghai. Though you have to pay attention as there is  lots of antique look-a-likes too to attract the tourist. But if you are patient you can find some real jewels.

Looking at the ordinary life in the streets of shanghai the current fashion is quite easy to see. The hairband is a big deal this season. It is a must have. Hair is either curly or straight. Layered hair is so passeé. A-line jackets, leggins, bubble skirts, ballerinas and ankle boots are seen. The futurism with metallic colors is not here yet.  Everything cute and girlish is always in fashion in China. Women like lots of details and decorations and womenly shapes. Even though Asian fashion is widely copied and influenced  by the western world, they dont really get excited about  the minimalistic fashion and over size clothes domination lately. Women do love to dress up and look their best every day.