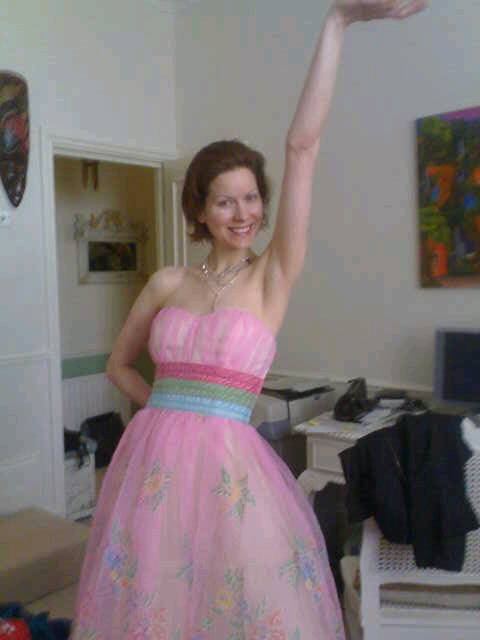 Today i am testing with tracey halls. Www.traceyhalls.com

it was raining this morning and i took the train to my test. today we are shooting garden party dresses and going to shoot in hyde park under the blossom trees (in the cold and rain). they say it will clear up later today to a whole 16 degrees. tracy has been so kind to offer me a warm coat.

when i came from the train this morning and i was walking down the street and i saw a boy walking ahead of me. i felt like i had to talk to him. so i ran up to him and tapped him on the arm and said hi! his name is danny and he was on his way to go to the dentist to get his tooth pulled out. he was so afraid. i hugged him and said, "dont be afraid. it will be alright. just surrender. everything will be fine. just stay councious. do not fall asleep. tell your body to relax over and over. watch the fear fall away, like sticky black goo into the floor. leaving you white light everywhere." i let go of the hug and i held his hands looking into his eyes.

i said, "isnt it funny? you're not supposed to be able to run up to someone on the street and say hi and how are you!" i said, "this is what the problem is on the planet. i want to wake up though! i want to wake up and start breaking old ways!"

he said, "yeah i  know what you mean. its all about being human. its breaking stereotypes."

he said as we continued to walk together, "yeah, its so beautiful here, you just want to stay awake all the time. the world is beautiful."

I said, "the world is what you think it is! the whole planet is about creation. look!" i said pointing at the tree, "everything is set up to grow up here! everything is creating at every moment on this planet!" he said, " yeah, you can make anything happen--any dream--any idea--any reality."

"where are you going?" he asked.

i said, "i want to go with you! i want to walk a little bit with you."

he said, "ok, and then you can cut down the street over there and be on fellows road."

"if everyone would wake up and realize we can create whatever we want in this world--" i said.

"there would be no bin-ladens! no war!" he cried.

"--there would be no separation." i said.

"time and space then would not matter as you could create instantaneosly anything you want." i said. "i have made almost no money this month. certainly i gave out more than i have earned. and yet everything has been provided for. how can you explain that? everything i need is provided for! i am standing here and alive before you."

IKE--THE WORLD IS WHAT YOU THINK IT IS.

THANK YOU DANNY! i hope that you were able to relax in your chair and let all the fear fall away and surrender. hope you find my blog and we meet again. thanks for being human.

we hugged eachother fiercely and parted.

it's all about the secret, soma!

This is great! I have managed to avoid the dreaded bathing suit polaroids today because i am shooting for Flux Magazine!

Video of the ride

No rest for the weary. One of the bookers sent me off right away to a casting for an editorial. The building was so cool and after signing in a girl came to pick me up with wicked short hair. I could not resist after meeting the fashion editor to take a quick run up and down the elevator. . .It was almost like going up on the eiffel tower. . .

SO MANY SUBMISSIONS TO THE we are not afraid website. too cool. check it out here

WE ARE NOT AFRAID

in responce to yesterdays bombings, this wiked blog is voicing back to the terrorists. everyone is invited to post a photo to the blog! http://www.werenotafraid.com/   check it out!

Continue reading "WE ARE NOT AFRAID" »

Blogs respond to London blasts. According to blog tracking service, Technorati, there were more than 1,300 posts about the blasts by 1015 GMT. With mobile phone networks suffering congestion, blogs and news websites are the way many are gathering detail.
Scores of people have been hurt after explosions on the Underground network and a double-decker bus in London.

i checked in with my modeling agnecy as diane and i were sitting at the tea to find out if anyone from the agency had been hurt. i called my friends but all the networks are down. i know from 911 that the only thing that works in these type of situations when they jam the airwaves, is sms. so i am still waiting. diane was phoning rob who was luckily in berlin, and sending sms to her friends. i am glad as always, that internet stays up and that msn is on. it was sthe same in 911, so it's the best way to communicate. i just pray everyone will make it through. my agency sms'd me and said that it was mayham in the city. they are right in the center. technorati watch list.