So what I tried to do was show BOTH perspectives LIVE!Streming on our facebook application and it turned out pretty well I have to say, Thank you to Yun Chen who is long time 360FAshion members and helped out the cause. Hempworks Fashion shows are always crazy and for a good cause. Makes sense because they are an eco fashion company producing eco clothing--and their hemp farm is in rural China where they farm the hemp, process it, and manufacture the clothing on an organic farm. Amazing isn't it? Sea Shepherd is a group of x-Greenpeace activists who became too extreme for the organization and were kicked out because they took a more "active" approach to stopping the destruction of the planet. Now they have their own television show on a Animal Planet TV Channel called, "Whale Wars". What they do is go to the Arctic circuit with huge ships and try to stop the Japanese whale harpooning that is going on illegally. The Japanese kill about 10-30 whales per year by harpooning them to death, and then they put them on a processing ship and take the whale oil and toss the rest in the ocean--such a waste and as you know, whales are endangered species. 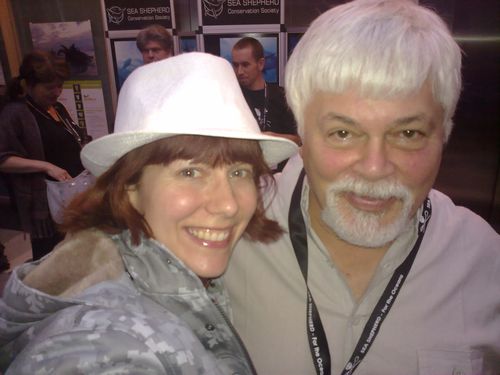 Little did I know when I said "Yes, count me in!" to the Hempworks team as they are 360Fashion members since a long time, how famous this organization was and how well known. Before I left for China, my new roomate happens to mention that his favorite show is Sea Shepherd, and then proceeded to show me how they use naval tactics to disturb the Japanese harpooner. their idea is to run them out of business and bankrupt them by keeping them from doing the farming of the whales. I certainly didn't mind hanging out with the Sea Shepherd Captain, Paul Watson, and the rest of the crew for a good cause. Not to mention the Sea Shepherd / Hempworks clothing is really top quality and so hot!

What I love about working with Hempworks is that they totally GET my Anina.net story. They specifically REQUEST me to walk down the runway with my phone and film and live stream. It means a lot to me, and no wonder they are members of 360Fashion since a long time. Check out the HoodlambMobile Catalog here and the rest of the footage of the show on their blog. 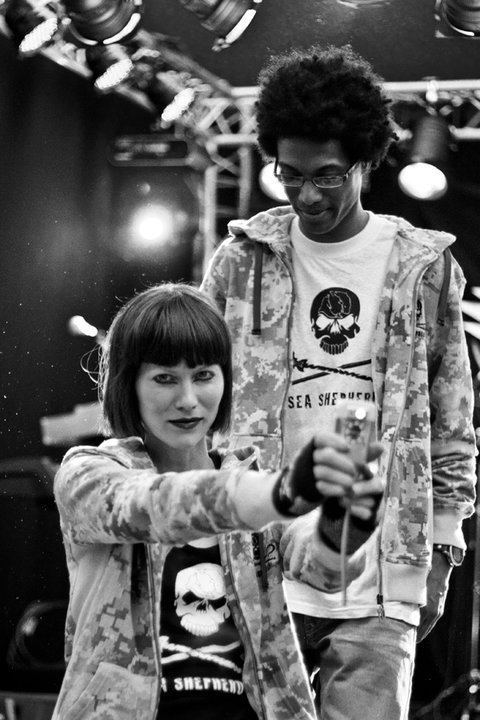 There is a final story to this whole post, which is that 2 Sea Shepherd jackets would not arrive in time, so as they are made in China from their organic farm, they had them sent to my office. The jackets were so heavy that I would have had to pay insane amount in overweight! So I had to take them out of my luggage, put one inside the other and wear them sweltering to death the whole Beijing, Moscow, Amsterdam flight. Only on the Moscow to Amsterdam was I glad I had them cuz the heating didn't work so I was all snuggly warm for some hours. But MAN to 2 jackets weigh a TON! Many thanks to my friend Alec who got me to the venue on time cuz boy was I tired! 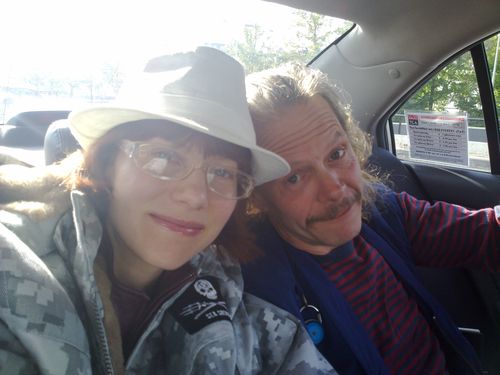 ps he's a world renowned photographer in the "hemp" world. 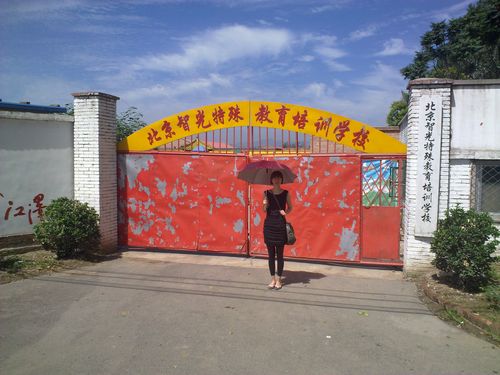 I believe that when a country has been so good to you that you have to give back so after my shooting with Jefen and before flying off to London, I went to visit the Disabled Children's NGO that my friend Brian Zhang is running. The NGO teaches physically and mentally disabled children to sew, read, write, maths so that they can have a place in Chinese society. I really appreciate the work of Brian Zhang, when he could go out and be all commercial, having been schooled in the west and coming from a family well connected, he decided to come back to China and create some socially economically sound companies. I am really grateful that there are people out there like Brian Zhang with his other NGO, the Performing Angels Troupe, a group of disabled children that are taught to act and perform theater in order to get hired and have a place in society. The NGO that sews their costumes are the disabled people of this school. When they graduate from this school, now Brian is creating a farm community where they can live when they are older and he's building a bigger workspace atelier for them in that space along with a hospitality training and place that can be rented out by people or companies for events or retreats. Brian took me to the farm and showed me what it was like to be in the Chinese country side. 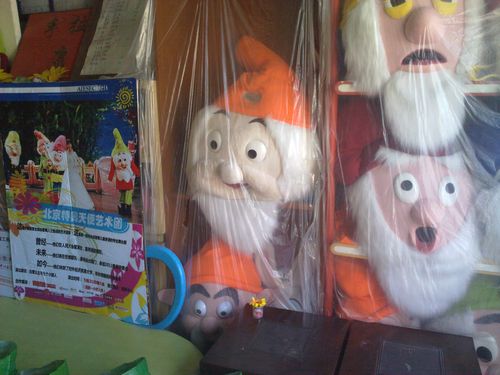 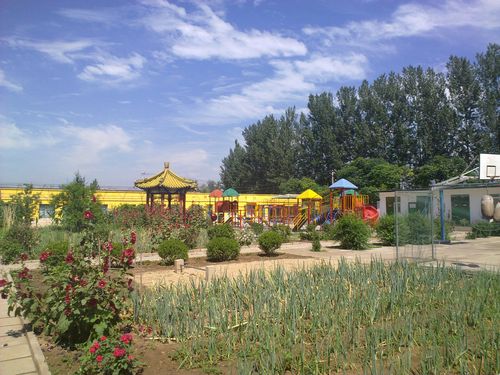 This is the school where they live and learn and work.

Benefit for Alex Grey's Chapel of Sacred Mirrors. I prepared all raw vegan Salad, Sprig Rolls and Lasagna for 130 people. Check out Raw Chef Dan: Dinner at Cosm post for the mouthwatering photos! 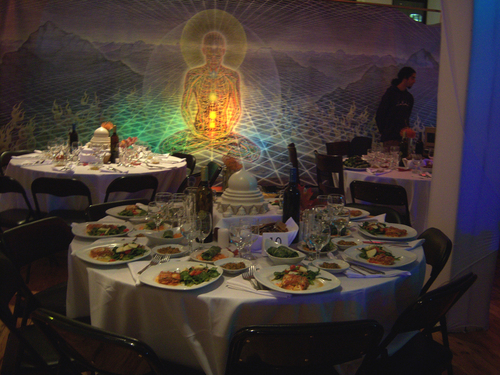 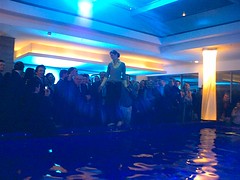 hehehe...i got nominated by mr. burda! so at least i went for tripple the price.  ;D
loic le meur interviews yossi vardi about it!

so the story goes like this, first DAN (bravo dan!) jumped in the water for 1000 euro for charity. then mr burda pointed at me and said, "ANINA!". why not? it's for charity! but i dont come cheap! so i said, "3000 dollars!" and they said, "3000 dollars, going once, going twice"
no one raised their hands even after they said it could be shared! so mr burda and mr vardi agreed to split it between them, and so i did the dive into the pool.

so dan and i were the hero's of the evening but the real hero's were mr burda and mr vardi and the man who donated for Dan. the reason for that i was so motivated to jump into the pool was because of the conversation i had at dinner with the man who owns the most exclusive women's shoe shop in munich, who donates the sallary to the organization to employ someone to manage the project with the children. he was telling me at dinner how he didnt even have the right windows xp version for the 3 computers that he had. so i said that i had last year's version of windows xp that i could send him. i even said that if i knew where to send my old computers, i would send them to him. instead i left my computer laptop to the salvation army in new york to sell. i was saying that it doesnt take just money to donate to the program but people could donate old equipment, old xp or outlook 2002 cd's etc.

many thanks to HBM Marcom's for catching the moment and many thanks to www.ringfahndung.de for pointing it out to me! great JUMP PHOTO!

Dropping off a bag of clothes i dont wear any more to the homeless shelter. So happy not to have to throw them away but can give them to others.