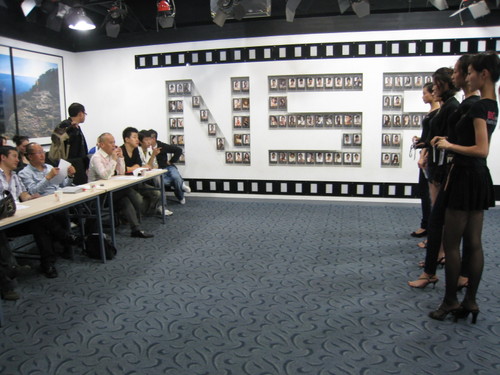 The NSR casting is always huge! Girls just line up and get looked at one by one. Who knows what they are looking for! How can they even tell the difference? What are they looking for? These and more questions, never answered in my mind. 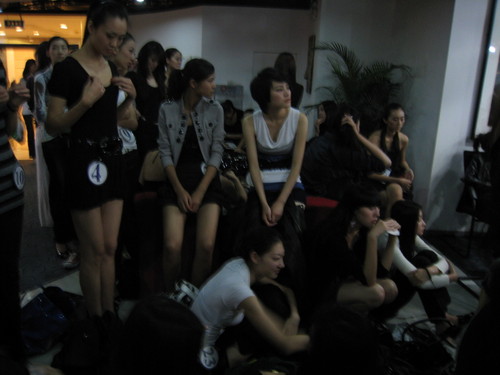 There are two camps at the castings: the Chinese Crew and the Foreign Crew and because of the language (I guess) the two don't mix! 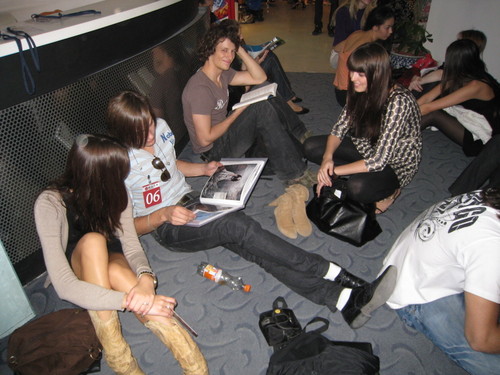 In the Foreign Camp, we are chatting, catching up, talking about who will win the elections, and looking at each other's books! 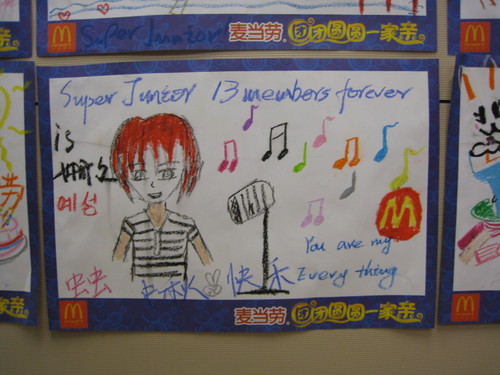 I hate to admit it, but we stopped in to MacDonalds nearby and got some lunch. There was this drawing on the board that was really looked like me today! The Russian Team! I'm telling you, it's totally true--Russian girls are HOT. It's like beauty grows on trees over there--I just don't know. They are wild, fun, hard, stubborn, and seriously into fashion! 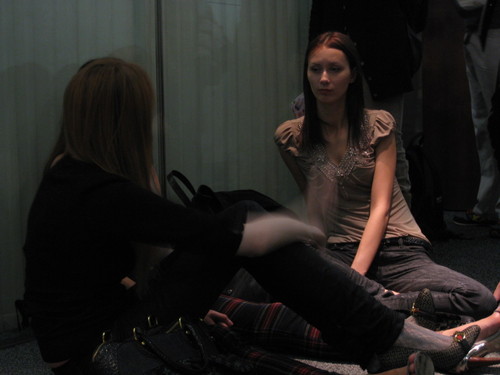 Sitting around waiting for our turn, we end up talking about the things that matter in our lives. Models have the unique ability to go deep with someone in a short period of time because we fly all over the world and don't have the time to slowly get to know someone. We just get to the point while waiting our turn in line. 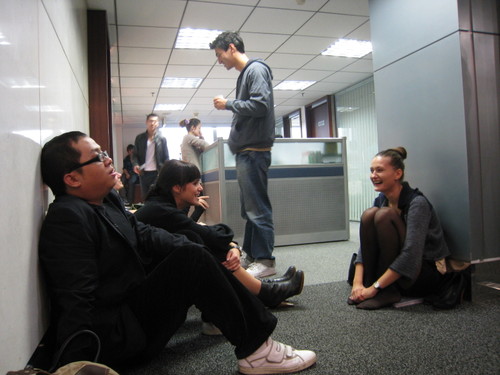 Our booker Simon sits and waits with us, explaining to us about the casting, what we have to do, who is the client, and laughing with us to make the time pass. Simon rocks--he's really professional and he is SUPER connected to the top clients. I really appreciate him--i dont know how he does it, but he always does his best to make everything go smooth...which in China because of the language is really hard to do!

Bently has a model agency just for Chinese models--yea, Bently the car. They have a magazine too and I would not be surprised that they have television and more. They have a lot of the Chinese top models and they've got really hot guys!

I was invited the other day to be interviewed as the foreign model on B TV China's "Common Ground", discussing the differences between foreign models and Chinese models. 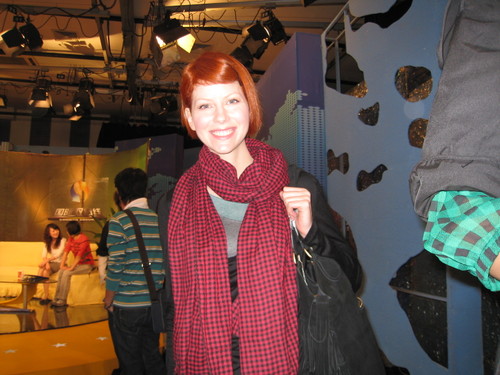 It is extremely hard to get on TV in China, and if you do--they say you are made--that's it, you can become famous. That said, meeting other male models who have been in China for a long time, they say Chinese people can't tell the difference between Caucasian people and you have no chance of ever becoming recognized. That would really be a pity because what I am here for is to promote my Anina Dress Up game! That said, the majority of models here DO all look the same: long brown hair or long blond hair--of course it's even hard for me to tell them apart sometimes (joking). I think that of all people, I have a good chance because I've got SHORT RED HAIR. How could they mistake that for someone else!? 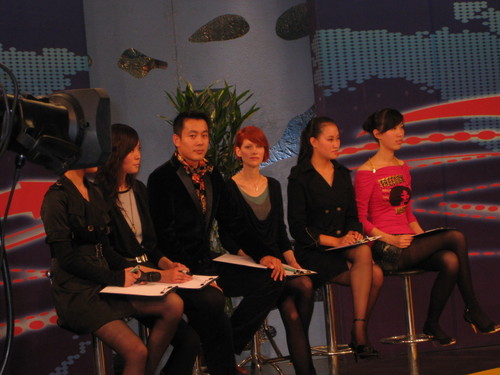 I was on a pannel of other Chinese models--the guy I'm sitting next to is a top model in China turned actor. At one point they asked us to walk and then they explained that foreign models walk more aggressivly than Chinese models--and it's true. When I walked I looked like I was going to eat everyone for lunch said my translator! The also said that foreign models tend to be scouted (and I told my story of being discovered in the health food store) whereas Chinese models go to modelling school, are trained, and actually have a "degree" in modelling so to speak. It was so interesting to hear. 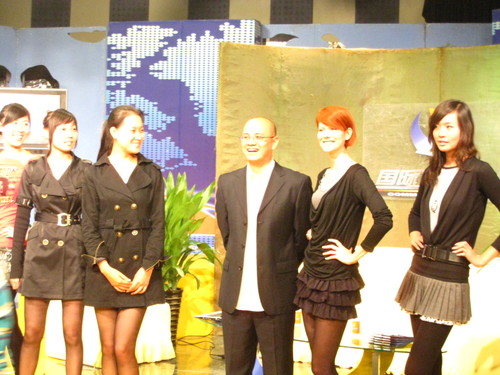 Dennis the host speaks English and Chinese so he translated when they asked me questions. He said my name 5 times on the television--so that was pretty good! I got voted the best outfit, the best walk, and the best model there by the pannel. It was a great experience and the director asked me if I have done any movies--I said, yes they have made movies about me and i would love to be in some Chinese movies but that I can not speak Chinese yet! So i could only play the SILENT NINJA that kills everyone and never says a word, or the GIRLFRIEND of the lead character who says, "What did they say baby?"! 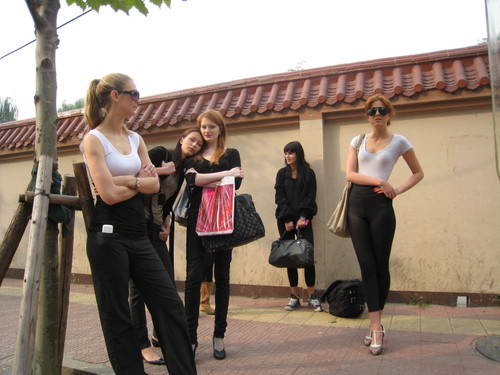 8:30 AM pickup and we are waiting all for the drivers at the designated spot. Everyone is ready for the fashion show castings with high heels and tight clothing. We are already to start the day still sleepy from the night before (the Pink Susy Wong Party). 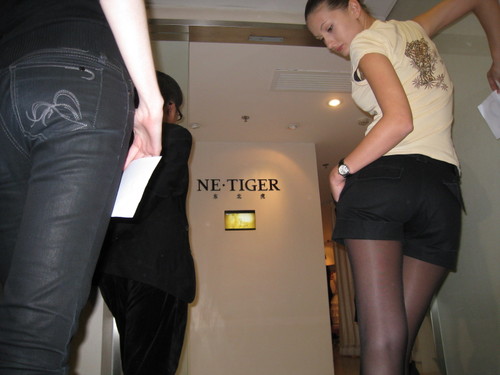 First stop is NE-TIGER one of the top Chinese designers. We have to walk and then we have to strip down and they whip out the measuring tape. Yes. No way to lie on your composite card. At the same time, all over the world you have to watch those measurer's like a hawk! Some girl's waists suddenly turned from 61 to 68.5! Your hips can suddenly explode by the measuring tape too if you dont watch out! 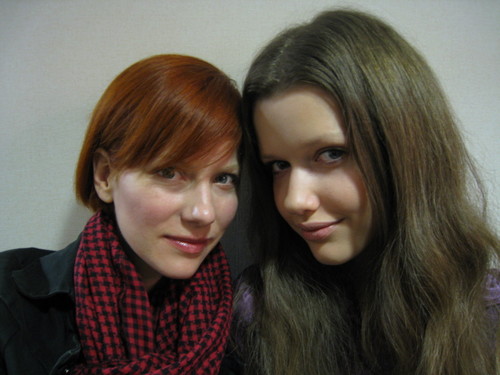 "Sena" and I cant really talk because she doesn't speak a lot of english, but it's one of those things where eyes and body language speak really loudly--we really feel close and smile with a glint in our eyes of mutual understanding. Oh, and today I discovered that her name is NOT Sena! The agency renamed her! Why? I have no idea--maybe Chinese people can't say her real name: Yanna. She's got super biiiig eyes and a lovely look. Today I did a photo shoot with my roomate Susan and we really got made up! Our waky hair, adn nice makeup made us really have a lauch the whole day as we ran back and forth from the dressing room! 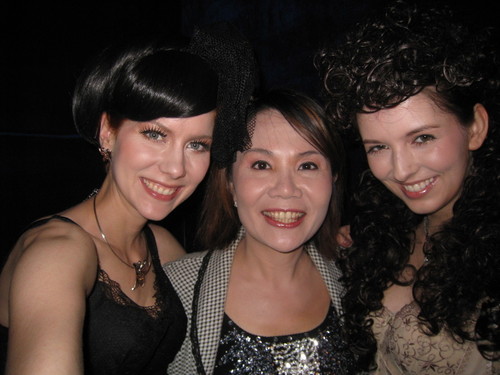 Miss Jin is from Taiwan and has built the lingerie and body sculpting company in the last 5 years--which is really fast considering her competitors have been in the industry since 10 years. Miss Jin is really amazing woman--she knows what she wants, she's clear, she works very hard, and with a great smile! 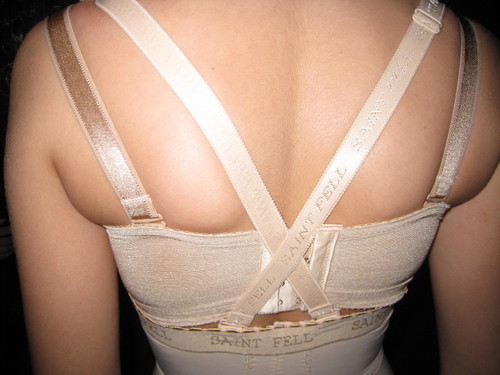 Body sculpting technology is pretty intense...the fabric is what is really tight and holds your body into place. You can not believe how hard it was to get it all on! That said, it really made you look like you were in perfect shape. Also, flashes of someone I'm crazy about undoing all the hooks gave me hot flashes and something to think about....;D

Say What You Need To Say

All the day we are talking in the car about how some people dont like to fight or discuss or even talk about problems (but they all talk behind people's back or to their best friends). I'm not like that, and sometimes it costs me the things I love the most because...it seems I'm difficult. But today we watched a great movie and at the end there was this excellent song that I think is so wonderful. Everyone though agreed in the end of the discussion...it's better to say the things and to discuss than to stay silent and dont talk about it. 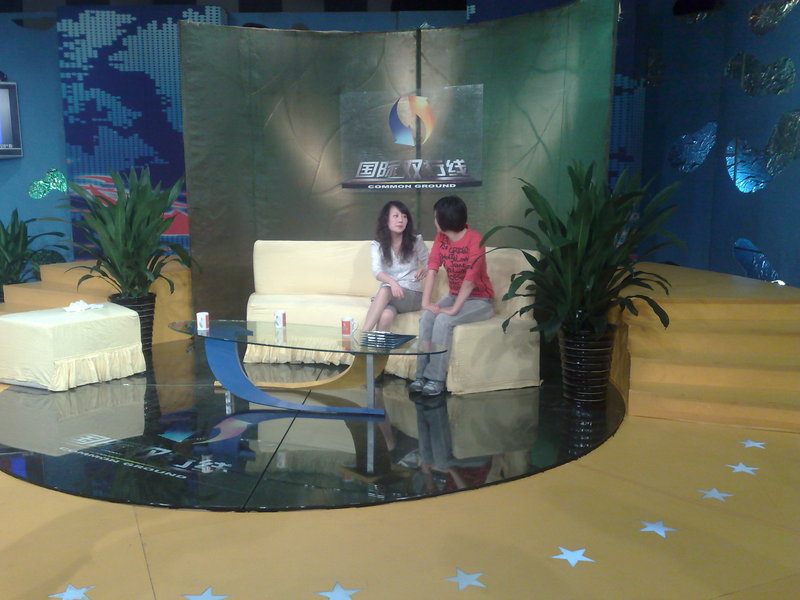 The set of the talk show. 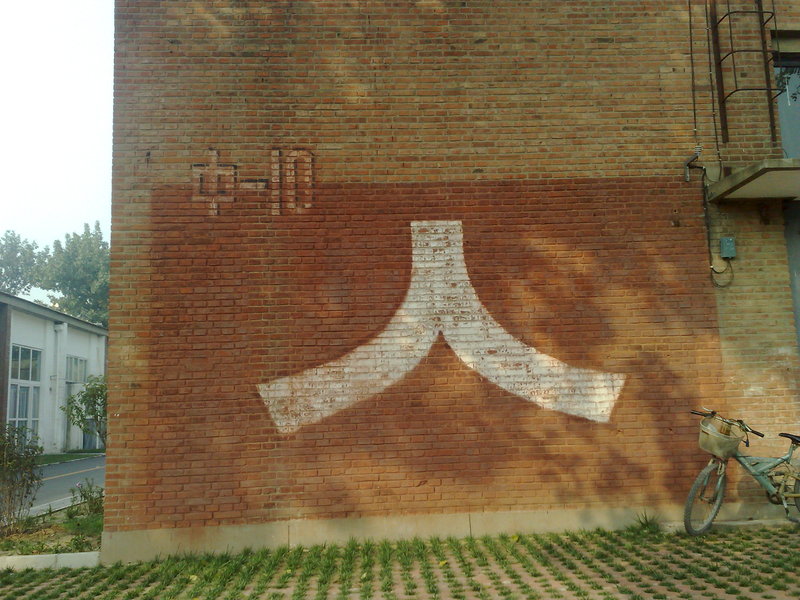 Yesterday on the plane i sat between several chinese business men. As i snapped my seat belt into it's lock, i glanced at the magazine that he was reading and there was my face! They could not believe it and proceeded to tell everyone around us. Then he started to teach me some simple chinese characters, and this one means people. Cool hey?