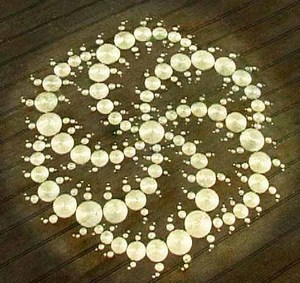 FROM MY YOGI'S COMPUTER VORTEXES

(this is research for my art by the way)

The father of water research is Victor Schauberger (1885-1958), an Austrian Naturalist who set the stage for all other water researchers interested in energizing water. Mr. Schauberger discovered that the vortex movement of water found throughout nature is what allows it to gather and hold onto energy, which he believed is based on implosion versus explosion. He also stated that water is literally a living being that can seemingly defy the law of gravity by levitating and that it can consciously flow in a different direction based on changing conditions in the environment.

However, Victor Schauberger appplied the principle of vortex water movement within a rigid system that does not exist in nature. An example of an artificially contained vortex is water going down a drain. There are many industrial applications of vortex water movement to mix chemicals into water, but in terms of healthcare applications vortexing artificially does not produce water that is life supporting to the chemistry of the body.

It wasn’t until a German artist and environmental engineer by the name of Paul Schatz (1898-1979) came along that the natural flow of water was understood mathematically and applied technologically in a way that duplicates natural water flow. Paul Schatz defined natural water flow as Platonic Solid Inversion Geometry in Motion, which I call Sacred Geometry in Motion. He stated that the way in which water moves in the environment looks like a cube and other platonic solids turned inside out, as a complex array of curved rather than straight lines. In fact, he even created sculptures of cubes turned inside out that looked like abstract art, but were beautiful representations of natural water phenomena.

With my proprietary application of Platonic Solid Inversion Geometry, there is an internal folding of water on itself along with an alternating clockwise and counter clock wise vortex spin of water that is inclusive of both implosion and explosion energy principles. A gateway is opened in water based on zero point and chaos free energy physics, allowing access to higher dimensional vibration and energy.

The existence of higher dimensions has been proven by mainstream physics, which is based on the M-Theory. The M stands for the Mystery behind everything in the universe, including life itself and is a vast array of frequencies on 11 dimensions. Higher dimensional frequencies are the source of everything from the smallest quantum particle to the cosmic vastness of stars and galaxies. In fact, the M-Theory brings to fruition Albert Einstein’s goal of a unified field theory by harmonizing the seemingly total contradictions between quantum mechanics and the theory of relativity.

Higher Dimensions as defined by advanced mathematics and the Spiritual Realms are one and the same. Anyone who has had unbounded experiences in prayer or meditation can relate to dimensions that are beyond the third.. In many different meditation practices, it also possible to hear vibration coming from higher dimensions as the music of the spheres

As it says in the Bible, the Word (Vibration) was the cause of creation. Recent cosmological research has recently proven that at the very beginning of the universe sound waves were created as a subtle shift in nothing resulted in something. Ancient Masters of Healing and Meditation have known for thousands of years that vibration is the cause of everything, including life itself.

Modeling this concept of functional connections is the basis of Permaculture Design.

While it is true that the limiting factor of vortex amplification was at one time limited to the size of the mechanism, and in part still is, due to the ramping up of the environmental energies into a scale large enough to become self-sustaining. Viktor Schauberger demonstrated quite the opposite through his levity disk designs. Said levity disk were actually precursors to the modern day turbo charging systems found on most automobiles of today.

Viktor's turbo produced an overhead vortex and simply imploded or sucked the craft into the sky with an overhead vortex. This feat was accomplished through a relatively compact unit. Which brings me to my point that over the last 100 years all environmental extraction systems built during this time were considered non-conducive to the extraction and/or amplification of energy due to the large size of the mechanisms. In affect what these people are saying is that the environment is just spread out over to large an area to be condensed into a small-scale unit capable of producing a powerful amplification.

Searl had stumbled across extraordinary phenomena associated
with vortex motion. He was one of a number of inventors who discovered a means of generating boundless free energy and an anti-gravity force simply by setting up spinning systems.

Michael Faraday made some remarkable but little known discoveries
in regard to spinning magnets. These have been developed by a number of 20th Century inventors, including Bruce de Palma and Adam Trombly, into N-machines or Uni-polar generators.  Faraday's discovery was remarkably simple but totally revolutionary. If a bar magnet is set spinning, the differential in velocity, down the radius, of each turning magnetic element, sets us a magnetic vortex. This effect is more pronounced with a series of bar magnets radiating from a central spinning hub or a spinning magnetic disc.

At a certain threshold of angular velocity, the magnetic vortex sets up an inter-dimensional energy portal through a vortex resonance. This simple arrangement is the operating principle of most free energy machines.

If a second arrangement of spinning magnets, or a spinning magnetic
disc, is coupled to the first, but arranged to spin in the opposite direction, the two opposing magnetic vortices will set up an anti-gravity force.

The analogy to the problem of alternative energies and their development is, of course, obvious. We are to educate the preaching orthodoxies. But orthodox solutions are no longer enough. Our system of education can only give from the past. The present must operate on inspiration and intuition, or the future will be lost.

The past no longer has enough of the answers for arising crisis for which there are no precedents. To keep pace with the requirements of the future, we must begin to teach not only what to learn, but how to learn, how to analyze, how to search for the truth. Only then will we be able to recognize the discrepancies between experiment and dogma and to cope with the problems which appear to be just beyond the corner. History has shown again and again that no single individual can rise above the species without being persecuted. The reasons for that are:

The former astronaut, Capt. Edgar D. Mitchell, one of our famous contemporaries, also stressed the need for an open mind!

"History has shown time and again that important scientific discoveries generally happen only when someone steps outside the limits of his traditional disciplines and looks at something from a fresh point of view. Then what should have been obvious all along comes into focus".

The speed of light was assumed to be constant and the maximum possible speed in the universe; vacuum was to be a total void. In reality, the speed of light as measured in the Michaelson-Morley experiments was not at all the same in all directions. The "ether drift" still amounted to the respectable velocity of about five miles per second, and similar results were obtained by D.C. Miller in a series of experiments extending over 25 years, from 1902 to 1926.

"Even worse, the measurements showed such marked discrepancies with previous results as to occasion a distress call to the US Coast & Geodetic Survey, whose surveyors repeatedly remeasured the length of the tube and found no error there," reported the Popular Science Monthly March 1934 issue.

And it continued: "More recently, speed of light observations only emphasized the apparent erratic behavior of the light beam that the scientists were attempting to plot. On some days it seems to travel faster than others by as much as 12 miles a second.

Its speed seems to vary with the season, also in a mysterious shorter cycle lasting about 2 weeks. Finally, the scientists ended by taking an AVERAGE of all the readings which has been announced as 186,271 miles per second".

In his paper "A Critical Look At The Theory of Relativity", Library of Congress Cat. No. 77-670044, F.K. Preikschat compiled all known light velocity measurements during the past 300 years or so, from Olaf Roemer in 1676 to the Laser measurements conducted by the National Bureau of Standards (USA) in 1972.

Of the 27 experiments undertaken in this field, 18 of them after the turn of this century, it must be concluded that the velocity of light as measured within the reference system of our Earth has changed as much as plus/minus 50 km/sec during the past century. Preikschat plotted a curve of these deviations and suggests a possible relationship between sunspot activities and changes of the Earths magnetic field during the time period in question.

The universe, as we know at the present time, is composed of many units ranging in size, for as far as we can tell, from - infinity to +infinity. Units like galaxies and clusters of galaxies are some of the larger units we know of. Towards the smaller end of our knowledge are the atoms, made up of protons, neutrons, and electrons, and interacting with countless other particles such as neutrinos, mesons, and baryons. Most of these particles are even smaller than any of the components of the atom. In fact the only limitation to the size of the particles we find seems to be in the resolving power of our instruments and the Heisenberg uncertainty principle. This seemingly endless range of universal units leads us to ask, "What is the universe made of?", "Is there any really basic element that composes all that we know as the universe?". These questions will be extremely hard if not impossible to answer.

Unicorn's Horn.... :"Unicorns are horse-like creatures with one horn that spirals up from their forehead. One touch of the unicorn's horn can purify water and make sick creatures healthy again. Unicorns are wild. They run very fast and are hard to catch. Who can hope to tame one? Only a young girl who is pure and good can hope to tame the wild, elusive unicorn." from: http://fantasydreamworld.homestead.com/unicorns.html

It's a good 'screw up', you ignite your pining - 'pinion', then it becomes REALLY free (self-steering).

Good all round introductions are Hidden Nature and Living Energies.

FROM MY YOGI'S COMPUTER VORTEXES

(this is research for my art by the way)

The father of water research is Victor Schauberger (1885-1958), an Austrian Naturalist who set the stage for all other water researchers interested in energizing water. Mr. Schauberger discovered that the vortex movement of water found throughout nature is what allows it to gather and hold onto energy, which he believed is based on implosion versus explosion. He also stated that water is literally a living being that can seemingly defy the law of gravity by levitating and that it can consciously flow in a different direction based on changing conditions in the environment.